Here's a little logo we've been working on for our friends at Tom Groggin Station.

Located in God's own country in Victoria just on the southern side of the upper reaches of the Murray, Tom Groggin is an idyllic relic of past days when cattle stations were carved out of natural alpine areas. It's reportedly where the Banjo created The Man From Snowy River and is iconic in horse culture. The mighty Murray is just a 20ft wide creek of crystal clear snow fed mountain water at this point.

It was only last decade that the Bracks government took away the stations right to have cattle graze in the Victorian Alps region and it became a tough place to run a business. It's been a popular place for a country stay but is now offering more in the way of accommodation.

If you want to travel south via one of the most scenic routes in Australia, then head down through Jindabyne and past Thredbo on the snow gum lined Alpine Way, which doubles back northwards to Khancobin. Just near where the road turns north you run along the Murray and there on the other side is Tom Groggin. It's like Australia's version of Rivendell, but with kangaroos, not elves.... 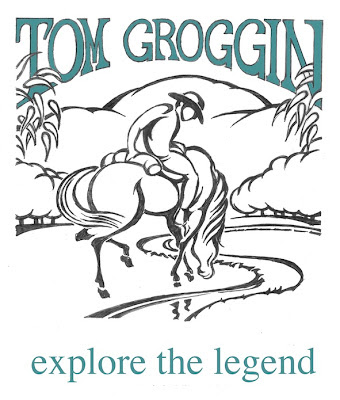